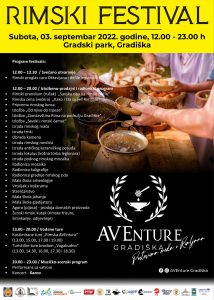 On the 3rd of September 2022, the first Roman Festival within the ADRILINK project was held in Gradiška. The festival took place in the City Park. 2,000 years ago, Gradiška was called Servitium. Thanks to the Roman Festival, the inhabitants of this city had the opportunity to get acquainted with the culture and tradition of this area during the Roman Empire. Blacksmiths, legionnaires, and cooks prepared fish and other dishes modelled on Roman cuisine, evoking the time from the period before the Common Era. After the proclamation of Emperor Octavian was read, a parade of legionnaires followed and the first Roman Festival in Gradiška officially began.

The Roman Festival is a new attractive tourist product of Gradiška. The City aims to become a more competitive and attractive tourist destination which also focuses on the preservation and promotion of the Roman era. Also, the goal is to expand the tourist market to the international level, and this festival has achieved the goal. The rich festival program was prepared by the City Administration of Gradiška, with the support of co-organizers, businessmen, restaurateurs, institutions, non-governmental organizations and interested individuals.

Guests attended the first Roman Festival: “Poetovio LXIX’ Society for Roman History and Culture” Ptuj and Cultural Art Association “Baron” Markovci from Slovenia, Craft “Stari zanati” Hlebine from Croatia and Citizens’ Association “RUSAG” from Prijedor. Also, providers of tourist and hospitality services from Gradiška, the associations of citizens from Gradiška, non-governmental organizations and many others took part in the festival.

Visitors to the Roman Festival could enjoy the all-day exhibition and sales program, which included carousels with baskets, a Roman story room, a small Roman riding school led by the members of the Equestrian Club “Arion” from Gradiška, presentations of Roman fashion which was provided with help of the Cultural Art Association “Kolovit” from Gradiška, an exhibition of Roman objects presented by the Association “Denarius” and the AGORA (Roman market), which were accompanied by stalls of local producers showing and selling their own products, such as “Gorštak” craft brewery, “Berry Tale”, PPG Trninić-apiary “Kraljica”, PPG Gagić-apiary “Gagić”, PPG Subotić “Carska ljeska”, PPG Malešević “Đed Niko”, “Fruit organica”d.o.o., “Košnica” d.o.o., PPG Tomić-apiary “Tomić”, “Galenfarm” Gradiška.

The restaurant “Đerdan” Gradiška took care of presenting the rich Roman table. For the youngest, a rich workshop program of calligraphy, Roman mosaic making, a small school of archaeology, archery and a small school of gladiators were prepared. In the evening, visitors could enjoy a fire performance, and socialize with each other, while enjoying the performance of a local band “Kazoo”.

A whole-day program gave visitors the opportunity to discover many secrets of the Romans, rules, customs and crafts of ancient Rome, taste traditional Roman products made of fruit, honey and hops, participate in many workshops and go back to the period BC. The festival was complemented by rides on the Sava River, which were provided by the tourist boat “Vagabundo”. The Roman festival lasted until midnight. In addition to workshops on calligraphy, mosaics, building the Roman wall, braiding ropes and making boats, swords and other objects, as well as exhibitions of food, drinks, weapons, tools, clothing, women’s Roman corner, water tours, there was also a musical and stage program with fire performance.

It is important to say that the first Roman Festival really looked attractive and was visited by hundreds of people from Gradiška and other cities. It is already certain that it will become a traditional festival in the City of Gradiška. On that day, Gradiška became Servitium, as in the time of the Romans.