The First Landscape Day In Jesi

The First Landscape Day In Jesi 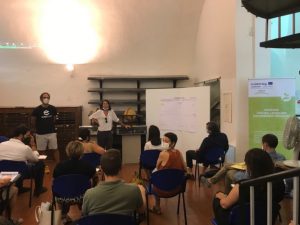 Last Summer, on 28 July 2021, the Municipality of Jesi organized its Landscape Day hosted in the fascinating spaces of the Museum of Printing Arts which presents a particular collection of printing machinery, movable type, ancient tools that tell how the way of communicating is developed over the time. Basically the Landscape day was addressed to citizens and it was aimed to present the ADRILINK Project by explaining what possibilities of tourism are connected with the landscape. In fact the title of the event was:“Landscape and Tourism. What prospective for our territory?

In the same day the LINK-Lab of Jesi was established. It is formed by a group of local experts who started debating on how to define the Plan of Action for the implementation of the Interpretation Centre in Jesi. It was a very interesting debate, where different ideas and thoughts of different stakeholders were shared by exchanging knowledge and different point of views regarding the possibility to develop an Integrated Strategy on Landscape and Tourism for Jesi.

Both the Deputy Mayors for Culture Luca Butini and for the Environment Cinzia Napolitano launched the Landscape day, highlighting how important is a multidisciplinary and multisector cooperation and how is close the linkages between culture and environment for rethinking an innovative strategy on tourism capable of enhancing the beautiful territory of Jesi and exploiting its great potential from economical and cultural point of view.

The fact of having choose a Museum as place for launching the Adrilink Landscape Day is a further message of how the institutional places of culture could be open “laboratories”, living engines and active places for developing local innovative policies. What is the most suitable location for a journey that start from the desire to interpret  the local landscape in all its complexity made of nature, people, traditions, sounds, perfumes, pleasures and beauties? The Museum of Printing Art and Communication.

After a demonstrative and short tour visit of the Musem, the Group of Expert started discussed by following the presentation of the project which was introduced by  Marco Cardinaletti, tha Adrilink Project Manager, who made an overview of the Project Goals, Activities, and Expected Results. After,  the Studies and Assessment Reports produced during the first phase of the project and  implemented by the Technical and Scientific Committee of Jesi (Mara Braconi, Simona Cardinali, Federica Micheli, Romina Quarchioni, Daniela Vitali, Mattia Tisba). The reports were aimed to provide the expert group with a working material from which to start a discussion.

After that an open discussion was organized as brainstorming activity leaded by Federica Appiotti, CORILA representative (PP2). She followed  the methodology which was developed by PP2 for supporting  each partner in managing LINK Laboratories. The discussion brought very useful elements to be considered in the landscape interpretation activity. Basically, lots of suggestions and feedback come up from the discussion around the role of landscape for tourism as complex system of relationships between environments, places, people, traditions, stories and flavors as well.

During the second part of the Landscape Day (Evening Session) some best cases were presented by two important key-experts. The first one by Fabrizio Teodori who spoke of a new approach to ethical and sustainable tourism. The second one by Claudia Lanari, Head of Marche Region Tourism Department, who illustrated the territorial marketing strategy promoted and activated by the Marche Region. The last part of the conference explored the connection between art and landscape. Primarily was Salvatore Carlo Laconi III (a Landscape Artist) who presented his artworks and his last publication “Connecting Landscape” where he  explore the interesting relationships between landscape art and technology. The second one was by  by Alessio Ballerini and Francesca Tilio entitled “Just listen” where photos, videos and sound portray an exchange of gestures between characters who become antennas for connection places each other. Around 100 persons took part to the event totally.